Well, it’s about a year since I last posted on this blog. Does once a year make me a regular blogger? I suspect it just makes me a terrible blogger, and I’m determined to do something about that. I am. Honestly! It’s not as if I didn’t have plenty to blog about in 2016. With a newly-signed book deal, and my début novel coming out in the summer, there was plenty going on in my life and I really should have been both shouting about it from the rooftop (which I did), and blogging about it from the laptop (which I didn’t).

So my New Year’s Resolution was to do better with social media, and it’s one I’m determined to keep. I have even more to blog about this year, and I’m not going to waste any of it. But first … Here’s a little of what happened last year …

The first 6 months of the year seemed to be gearing up to July when I flew over to UK, very excited that what I’d been working towards for about the last eight years – becoming a published author – was about to happen.

The actual publication day was also the first day of the Romantic Novelists’ Association’s conference, which was held at Lancaster University. It was great to catch up with writerly friends, most of whom I hadn’t seen since the previous year’s conference in London’s Mile End Road. And contrary to the photos, it wasn’t all just eating and drinking – we had a wonderful programme, choc-full of talks, workshops etc. 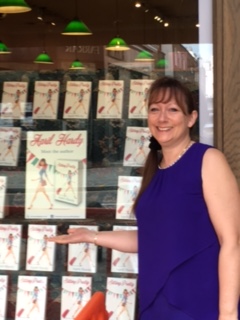 Then, a week later, Sitting Pretty, my début New Forest romantic comedy was launched at Daunt Books in Chelsea. It was a lovely evening, and family and friends had travelled from Hampshire, Dorset, Kent, Surrey, Bristol and Bedfordshire to be there. It was so good to be able to share that evening with them. Some of us stayed on for the weekend, meeting up at the theatre on the Friday night to see Matilda.

A short, but oh so enjoyable holiday followed on the Isle of Wight, somewhere  I used to holiday as a child, before heading back to Dubai.

The Word Trade Club, where I’m lucky enough to be Writer in Residence a couple of afternoons a week, was the venue for the Dubai launch of Sitting Pretty. It’s a fabulous venue, and its monthly Ladies’ Lunches are a Dubai institution. The food, the company, and indeed the whole atmosphere were, as always, fabulous. Jane, the events manager was a wonderful interviewer, and my two male guests (Andrew – my husband, and Peter – our wonderful international sales rep) were happy to be honorary Ladies for the afternoon!

Well, there’s so much more I could carry on with. I could tell you about my second novel, Kind Hearts & Coriander, or about the upcoming Emirates Lit Fest. But I’m going to save those for next week’s blog …

Well, after my babbling on about getting ready for this year’s NaNo, I had a frustrating start – I couldn’t get into the website, to register! Some friends I spoke to were having the same problem, so I guessed there was too much traffic on the website and went shopping instead, to stock up on some nice, healthy NaNo snacks. 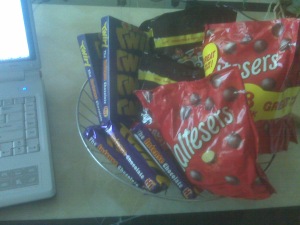 November 1st dawned – Day 1 – and I still couldn’t access the NaNoWriMo website. Hubby, knowing the full extent of my technophobia suggested I might be doing something wrong, so I was (rather selfishly, I’m ashamed to admit) relieved to hear that I still wasn’t the only one. We knuckled down anyway and got on with the business in hand – Day 1 – Target – 1,667 words. Well, I managed 1,911 – trying to get a bit ahead of the game, as I know there’ll be days this week when I can’t spend long at my desk. Some of my Facebook friends managed over 2,000, leaving the rest of us with word count envy.

Day 2 – and Yippee! I managed to get into the site and register! Contemporary romance is my genre, and almost always international. For last year’s NaNo, I wrote a love story with a ghostly theme, set in Abu Dhabi and Dubai. This year, for a bit of a change, I’m writing a romantic comedy, set in an imaginary English village. That’s one of the great things about NaNo, you can wander out of your usual genre/sub-genre and try others on for size. Day 2 – Target – 3,334. Only got as far as 3,095, so with hubby home tomorrow (it’s a 3 day weekend here, this week) I’ll have to catch up on Monday.

Day 3 – I pretty much know what I want to write today and for the rest of the week, so is it too early to start thinking about plot ninjas?

>Ask Sally #23 Plot Ninjas
quillersplace.wordpress.com
>A new question from my lovely friend, Womagwriter.What’s a plot ninja? I’ve seen the term on writing sites, and you say you’ve put some in your nano first chapter. Can you explain what they are…
As Sally Quilford explains, plot ninjas began as a helpful device for when NaNowers might start to flag a little. A helpful bod suggested they all have a ninja leap out of a wardrobe at some point in their novel! The idea grew and now any unexpected happening in the story can be a plot ninja. I’ve specifically asked some of my non-writer friends to think up some for me for next week. I’m looking forward to seeing what they come up with …